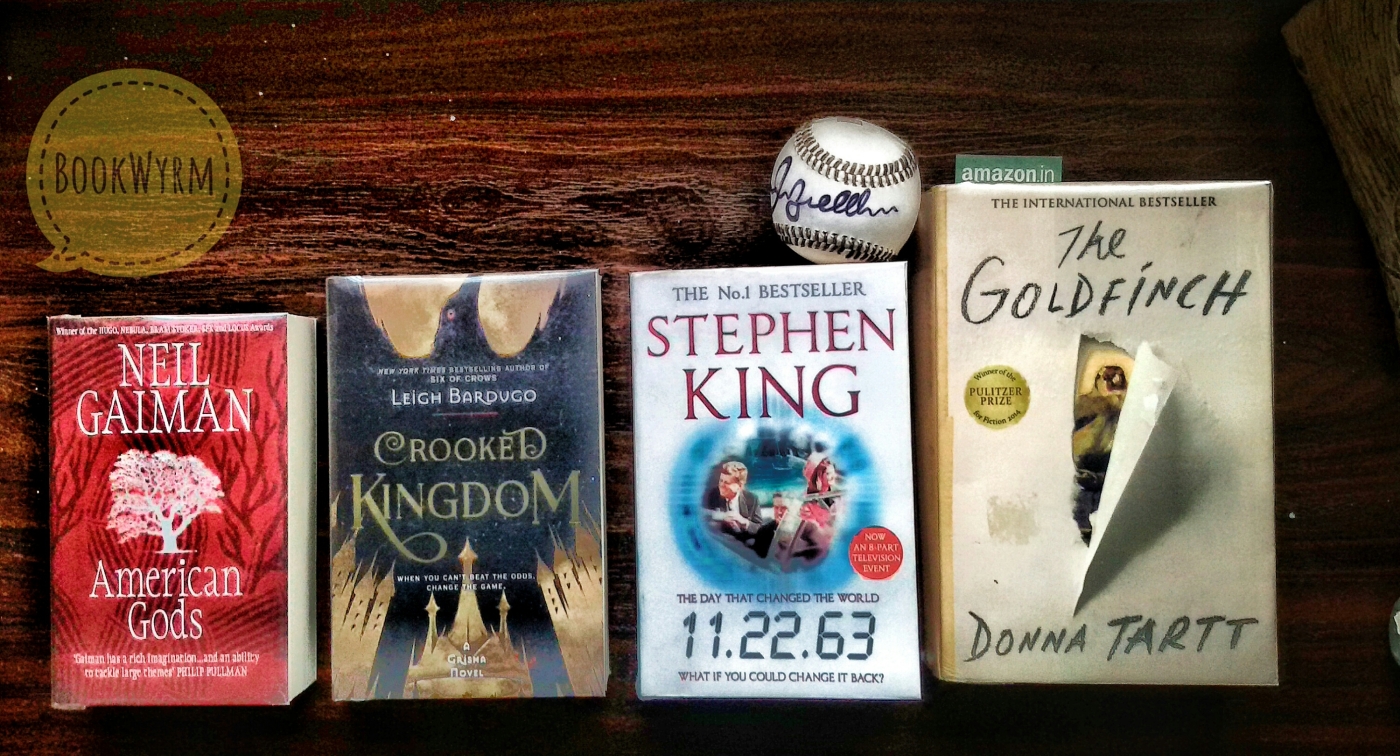 Hey again everyone!Today I am here for the book review of Crooked Kingdom by Leigh Bardugo.

Kaz Brekker and his crew have just pulled off a heist so daring even they didn’t think they’d survive. But instead of divvying up a fat reward, they’re right back to fighting for their lives. Double-crossed and badly weakened, the crew is low on resources, allies, and hope. As powerful forces from around the world descend on Ketterdam to root out the secrets of the dangerous drug known as jurda parem, old rivals and new enemies emerge to challenge Kaz’s cunning and test the team’s fragile loyalties. A war will be waged on the city’s dark and twisting streets―a battle for revenge and redemption that will decide the fate of the Grisha world.

VERDICT:- 3/5 (recommended to read full post as I don’t blog in conventional way .The final verdict can be anywhere…)

PLEASE DON’T LEAVE THE PAGE BY JUST SEEING THE VERDICT.SOMETIMES I WILL BE CONTRIDICTORY.Afterall I am just a human.(untill now !who knows ,what I’ll be when I evolve)

So sit back ,relax ,and enjoy the veiws .I hope you’ll find my reviews entertaining and sometimes I collide with your visions on the book.And trut me its good to know that you are not alone having same views.

SO PUT YOUR SENSE-OF-HUMOUR -GLASSES -ON .

Again today I try to cover this book in every aspect . Tried.

I would have come for you. And if I couldn’t walk, I’d crawl to you, and no matter how broken we were, we’d fight our way out together-knives drawn, pistols blazing. Because that’s what we do. We never stop fighting.

The characters are same as its in previous part Six Of Crows. But the depth of the characters are more astounding and vivid .As expected by Leigh Bardugo.The story revolved around the six characters and you can differentiate the voices of each one of them.This makes the book fast pase. I must say the writing of characters and developing them are the most difficult thing to do in writing.But Leigh just done it so easily that no one can forget any of the six characters.They are like in It .The characters stays with you through out the story as well as through out your life(worthless, if you hate reading).And here it goes. I just compared the characters to Stephen King’s characters developement who is the best character producer and makes them imortal.By this you can get the idea of characters creation by Leigh.You can have favorite but for every one it will be different.As you are choosing from the six best written characters.

The book sets in Fantasy world of Geisha,who are suppose to be healer through magic.But there’s a compound which makes them to be something like Faulty and makes them insane.This is the book’s one of the purpose.There are basically Six purposses in this book and no one clashes with each other but binded by each other and makes the reader to emerse groundly with it to know about each and every purpose to fullfill.

As you guessed by this.The book gives very magical and curious feeling .The writing and clear characters makes the book easy to grasp and the again every thing is happening in front of your eyes ,in your room.You don’t really remember like you are reading and this makes the book to hold you.

The writing pattern is same as the SIX OF CROWS.

The plot is very much covered in the six of crows reviews.As it’s a conclussion part for SoC.I am not saying that it just have the conclussion but its mostly is.As there’s something happens in the end part of six of crows and for that this book takes place.This six of them again plots a masterplan and fails and by failing you could get the idea if you are familiar with Leigh’s writing.This is here a master stroke of plot twist.But there’s a flaw in this part by plot twist I did’nt satisfied as the six of crows plot twist(s).In the end the plot is so badass and unique in its own as metaphorically like Harry Potter.Genuine writing and You did’nt read something like this .Atleast I did’nt.

By logies I mean dualogy or trilogy.

I hope I get many suggestions…

You can imagine the intrigue level if you’ve read six of crows….If not you can click the link given in description and atleast know the excitement for me to read crooked kingdom.If you’ve read SoC and then in the end something takes place where you can’t control your desire have another part.

I think the reason is ,book is short for that kind of experiment.For rating the intrigue level for Crooked Kingdom move to and forth from the mediocre to highest rated books like Harry Potter .

Fear is a phoenix. You can watch it burn a thousand times and still it will return.

The book is so great in its own way.The reason behind it is that it is so logically correct.What you expect in the having characters like the strongest,the weakest,the magician,mindbender?For that they are human first….They think like humans and not like overusing there powers.Here the writing proves that it’s a master piece.

Leigh creates a fantastic fabulous fantasy world and give them powers .Suddenly she makes them to face there self confliction and that moment is the best part.She made them to face it like a normal human being.Like you and me.For the logical correctness there is some loss and some gain…but with time you’ll get to know it is logically correct.If you don’t think this much in reading then you’ll just emmersed youself in reading this without knowing how much time is left for you to be dead…

But for you guys I have to research and read every single aspect and write down here ,So you can enjoy reading review.And I don’t try but I cover every book by every single aspect. SO THE READES AND NON-READERS GETS TO KNOW WHETHER THE BOOK WORTHS GIVING A TRY?

Maybe there were people who lived those lives. Maybe this girl was one of them. But what about the rest of us? What about the nobodies and the nothings, the invisible girls? We learn to hold our heads as if we wear crowns. We learn to wring magic from the ordinary. That was how you survived when you weren’t chosen, when there was no royal blood in your veins. When the world owed you nothing, you demanded something of it anyway.

If you gonna compare this book then there no comparìson for this untill the comparing it wix the Six Of Crows.It’s so unique on its own .You’ll just found flaw in this book if you compare it with SoC.

The characters are for life time rememberance.The book is needed for the conclussion.The book is so entertaining that anyone can read. Non-stop.

Everyone should give it a try if they misses Harry Potter.(I said EVERYONE!).

Recommended Especially for autumn reads And for all who can read.

If you wanted more like this posts(I know you all wanted more you all GreedyOne) Click the link down below.

For the review of Six Of Crows click the link :-

To visit my site click the link down below:-

If you like this post don’t forget to click that thumbs up.I know you’ll do that.click it click it click it…… You all are AWESOME..till the next post ,be nice to each other and have a spare time in your life of thinking selflessly by thinking about others and for books ofcource and feel free in comment section whether it’s about post or any kind of advice for me or suggestions of books .It can be anything. Bye!…

One thought on “(Book Review)Crooked Kingdom by Leigh Bardugo”

Musings of a first-time mommy

Musings of a skinny teenager

Let's explore beauty within and outside self!